sponsored by the Zonta Club of Northern Beaches

The club was initiated after students had enjoyed participating in Birthing Kits packing days with the Zonta Club of Northern Beaches in 2012 and 2013.

The club’s objectives are:

Since formation, the club has had a number of fund raising events. It  has organised a large demonstration with boys from their companion campus, to say Zonta Says No to violence against women , gaining great coverage in the local media for their cause. 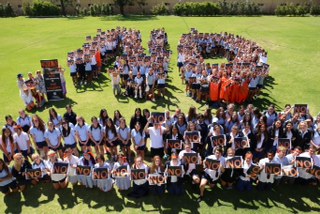