For 100 years, Zonta International has contributed to help achieve a world free of violence against women and girls through service and advocacy.

Violence against women and girls is one of the most pervasive human rights violations and a global epidemic. It knows no national or cultural barriers; it takes place at home, in the workplace and in open spaces, and affects millions of women and girls in peacetime and conflict. It includes psychological, physical and sexual violence, and harmful practices such as rape, female genital cutting, child marriage and human trafficking. Violence against women and girls threatens countries, inhibits economic progress, and prevents women from contributing to their community and creating better lives for themselves and their families.

Our ongoing service efforts are demonstrated through numerous local projects and programs, through the Zonta International Strategies to End Violence against Women (ZISVAW) program and through Zonta’s partnerships with the United Nations and its agencies.

Our ongoing advocacy impact is built around the advocacy campaign “Zonta Says NO to Violence Against Women.” Launched in 2012, the campaign has raised awareness of the global pandemic of women’s rights violations and has united Zonta clubs worldwide in conducting impactful advocacy actions to fight violence against women and gender inequality.

All Zonta clubs and districts are encouraged to take advocacy actions throughout the year:

During the 16 Days of Activism, 25 November-10 December, all Zonta clubs and districts are encouraged to take part in the Zonta Says NO to Violence Against Women campaign and to take local, national and international actions to influence the making and implementation of laws, as well as changing gender-based attitudes and behaviors to end violence against women.

Learn how Zonta is making a difference by reading Zontians in Action.

The Zonta Club of Canberra Breakfast is staging several orange-themed events across Canberra during the international 16 Days of Activism against Gender-Based Violence campaign.

“In Australia, 49 women and girls have died due to intimate partner violence over the past year,” said Zonta Club of Canberra Breakfast Vice President Glenda Stevens.  “While this is less than the 71 who died in 2018, it remains unacceptable.”

The campaign starts on November 25th, the UN Day for the Elimination of Violence Against Women, and culminates with the ringing of the Canberra Rotary Peace Bell in Canberra’s Nara Park on International Human Rights Day.

On 6 December, the Captain Cook fountain will be lit orange to draw public attention to the 16 Days of Activism campaign. “Orange is not only Zonta’s colour, but also the colour of the UN Sustainable Development Goal 5, which sets out a commitment to achieve gender equality”, said Ms Stevens.

Civic and Belconnen libraries will display stylish orange paper flower arrangements, with each flower representing the life of the 49 women who have died as a result of domestic violence.  The first name of each victim, and her age, will also be displayed, except where respecting Indigenous customs.

The campaign will conclude on 10 December with a morning ceremony commencing at 6.30am at Nara Park, at which the Canberra Rotary Peace Bell will toll for each woman killed in Australia in the last twelve months.

Zonta is an international service club dedicated to empowering women through service and advocacy.  The Zonta Club of Canberra Breakfast meets once a month. 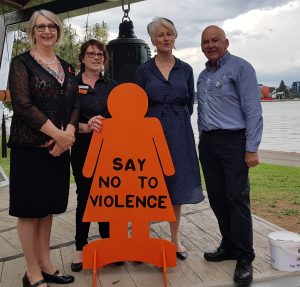 Your support is Welcome

Zonta gladly accepts financial contributions which you can direct to: